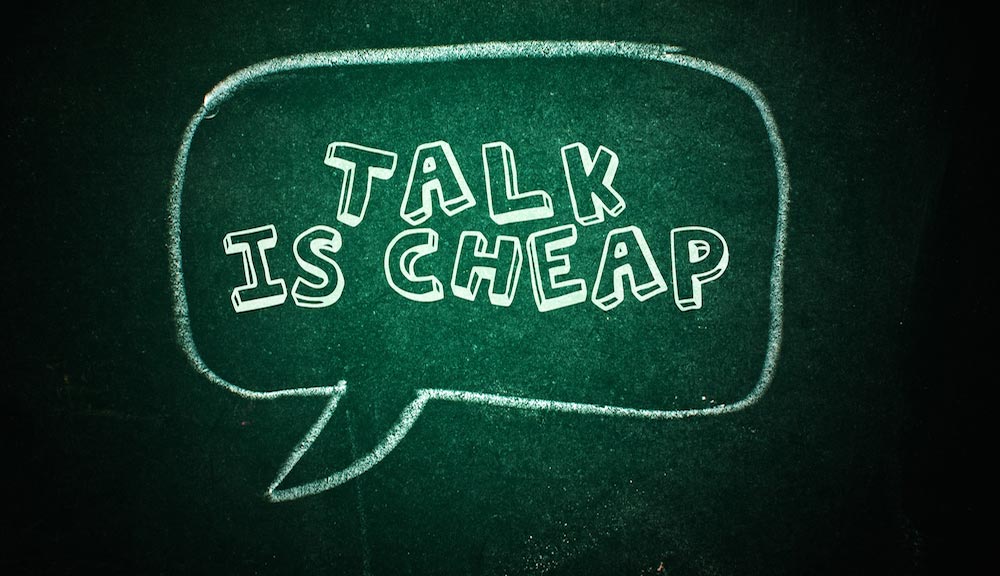 Talk is cheap. Only actions have high value.  That is universally true because talk doesn’t directly make change.  Actions do. Talk

I’m increasingly confused and frustrated by the Church’s modern rhetoric. Too often it seems to be an extension of the secular mind, rather than of Catholic thought.  The secular world—particularly today—focuses on flavor-of-the-month issues. Who and what determines the popularity of those issues, and the urgency with which they must be addressed usually boils down to public opinion, which is shaped by media talking points, and formed in propaganda pouring from the mouths of politicians.  In other words, these “issues” come largely from fantasy, or from a fantastic spin on actual facts, rendering the issue itself false.

Which is why I’m so surprised that some in the Catholic Church—those who should be functioning on a higher, and more astute level, intellectually and spiritually—are playing along.  It’s not a bad thing that the Church (or some in the Church) are talking about cultural and societal issues, bringing Catholic ideas to the table. The real trouble is that they are bringing bringing those ideas to the table the way a grownup brings real sugar and milk to a child’s tea party of empty, tiny plastic cups, along with real butter for the make-believe scones.  Bringing something real to a make-believe tea party may be fun to do, but you cannot dress imaginary scones with real butter, you cannot dress imaginary tea with sugar and milk, and you cannot address issues that are equally imaginary.  Yet that’s what we’re seeing more of.

It’s cheap talk: Talk that amounts to nothing, because it’s addressing a nothing.  It sounds good, but sounding good is the only good that comes of it.  Catholic cheap-talk is the worst, by far, because it sounds authoritative and risks fooling more people than does the cheap talk of the secular world.

Two of the many issues that are triggering Catholic cheap talk are racism, and immigration.  These may sound like real issues, but from the perspective of reality they are not.

A recent article on CNA reported on a pastoral note written by Detroit Archbishop Allen Vigneron. In it the Archbishop has a lot of great, true, important things to say about the Gospel, the transformative power of repentance, about human dignity stemming from the image of God in every human being.  All of that stuff was beautiful, and powerfully articulated.  But the crux of the pastoral note, “Agents for the New Creation”, was the evils and sin of racism..of all things!  Of all the things we need to hear churchmen addressing (gender theory, the assault on human sexual identity, the dangers and errors of the gay lobby, the modern Catholic’s loss of reverence for the Eucharist or faith in the real presence, the dangers of allowing politics to define our purpose or the evils of letting our families become secular think tanks rather than domestic Church’s…) racism is, in my view, very low on the list.

I don’t believe racism exists in the way that people often talk about it today.  As long as humans exist, racism will exist, somewhere, but it isn’t the widespread evil that it was in the past.  The way we talk about racism today, you’d think slavery were still legal, or that Jim Crow laws were still in effect.  In reality widespread, systemic discrimination against minorities does not exist anymore. You can work, you can own a home, you can become president, simply by being capable, qualified, and dedicated to working hard. The color of one’s skin doesn’t change that, one’s choices in life does.   I’m not saying that racism doesn’t exist in some individual people; I know that it does.  There are some people who are especially broken and they discriminate against others based on their race/ethnicity/skin color.  But that’s some people, not most people.  They do not compose the whole of the modern human order, they compose the exceptional fringe.  Most people don’t care about your skin color, they care about the content and quality of your character.

Racism, culturally speaking, was more of an issue into the 50s and 60s.  In 2018 cultural discrimination and racism sits in our collective roads-past. It’s in the rear view mirror, not the passenger seat.  Yet there are political points to be won, social currency to be gained, and credibility to be earned (however fraudulently) by resurrecting this monster, animating it like a lifeless puppet, and telling the world “This is REAL!”  I’d expect that silliness from the secular world, but not from Catholics, let alone priests or bishops.

Then there’s the issue of immigration. Specifically in this case, the so-called “Trump Muslim Ban”, which was upheld by the Supreme Court just yesterday.  The court confirmed that the President of the United States has constitutional authority to restrict inbound travel from foreign countries if the President deems it necessary for national security.  President Trump has not banned muslims from entering the United States, but has imposed a temporary travel ban from some muslim-majority countries.  The ban does not include all countries with a muslim majority, and it does not list every country with a majority muslim population. It also doesn’t include some countries with a greater muslim majority than the countries on the ban list.

This is not a ban on muslims, and it is not a ban against muslim nations. It’s a very calculated and deliberate measure to tighten our domestic security.  And yet here’s what the Church in the United States has to say:

“The travel ban targets Muslims for exclusion, which goes against our country’s core principle of neutrality when it comes to people of faith,”  and  “We are disappointed in the Court’s ruling because it failed to take into account the clear and unlawful targeting of a specific religious group by the government,” and “The Catholic Church takes a strong stand against religious discrimination, and we will continue to advocate for the rights of people of all faiths”

So, again, the Church is bringing something real to an imaginary issue.  A real criticism of an issue that doesn’t exist; firing real bullets at a boogyman of the secular world’s overactive imagination.  And here’s why that’s so foolish:

For anyone in the Church to adopt the same tired, grossly obtuse rhetoric and reasoning of the secular left—or even of some on the secular right—is embarrassing and sad.  I wonder how many of these priests/bishops lock their rectory doors at night, or lock their parishes during the day for security reasons, forbidding entry not only to Catholics who simply want to go in and pray, but also to strangers whose intentions are not known, and may be nefarious.

The referendum in Ireland to repeal the 8th Amendment to Ireland’s constitution protecting the unborn is a evidence of the consequences of the Church’s reticence to talk about real issues and preference to talk about fake ones.  Not long before that, the people of Ireland voted to legalize gay marriage—again, showing what happens when the Church is wasting its time talking about what doesn’t matter, and is too quiet about things that do matter.  This isn’t exclusively a problem in Ireland, though what we have seen in Ireland provides the clearest manifestation of the dangers, and the destruction that stem from what I call “cheap talk”.  The failure to talk truth, and to address real issues result in inaction, or disordered actions amongst the faithful, and their secular counterparts. Our modern day cheap talk in the Church is focused on nothingness—on non-issues of little or no substance. Our talk is not focussed on real issues that are doing real damage to persons, to families, and to society.

Meanwhile the secular heroes are calling infant baptism an abuse of human rights, are forcing religious orders to pay for contraception, and are attempting to force Catholic schools to teach error, are threatening to force Catholic hospitals to perform abortions.  The Church keeps talking about nothing while the secular world continues to mount attacks against truth, against the Gospel, against Christ, and against the Church itself.