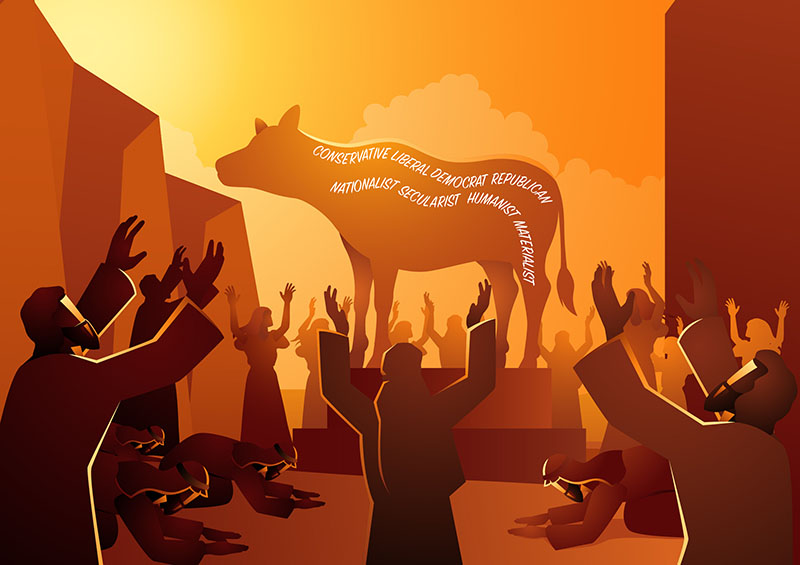 When your political affiliation or political ideology means more to you than God and His will, then politics is your golden calf.

I recently took the dive and joined the new social media platform Truth Social. Find me there @catholicadventurer. My time there so far has produced a resurgence of an old concern, which is many Americans (and the problem isn’t exclusively American) are more fanatic about their ideologies than about God’s will, God’s law, and the Gospel.

Too many Americans identify primarily as Democrats or Republicans—Liberal or Conservative—and their Christian or Catholic affiliation is subordinated to that primary identity. They are Democrats or Republicans first, and their Christianity is forced to play second fiddle, adjusting itself (distorting itself!) to better follow the lead dog, which is their political perspective. It causes Christians to abandon the direction of God in the Gospel, the Commandments, or Church teaching when those things are at odds with their political beliefs.

“Whatever forms a person’s center, whatever a person orders their lives around…, that is their real religion”

Religion isn’t always ordered toward God. Satanism is a religion—albeit a false one. The same is true of Scientism, Secularism, Atheism, humanism, materialism, and so on. Whatever forms a person’s center, whatever a person orders their lives around, whatever most occupies the mind and prompts the considerations, decisions and lifestyle of a person, that is their real religion and that is their god. Many Catholic theologians and philosophers have said this for a very long time but read Scott Hahn’s book “It is Right and Just” for the most recent authoritative example I can offer.

If a person’s political affiliation and their political ideals/ideologies are at the center of their existence, then politics is as much their false god as was the golden calf of the Jews at the foot of Mount Sinai. Politics, then, is literally a false god that is given priority over the True God. It is itsdirection and imperatives that guide us instead of God’s. It’s a grave sin, an offense against the first commandment, and it is a sin that those guilty of it will answer for on judgment day.

That’s not to say that every proud American/Democrat/Republican is, by default, guilty of idolatry.  Most aren’t. But my concern, and my reason for writing this, is that many are.  .

Be Catholic first. Before you’re an American/Republican/Democrat/Whatever be Catholic first. Follow God first and foremost and subordinate every other thing and every other identity to that primary identity. It may force you to change how you think, and it may force you to change how you live. But that’s the point of being Catholic. You won’t be asked “Were you a good American/Republican/Democrat” on judgment day. God doesn’t care about that. So why should you give it so much attention?  He only cares about how much you reflect the image of His son.

God keep you, my friend.